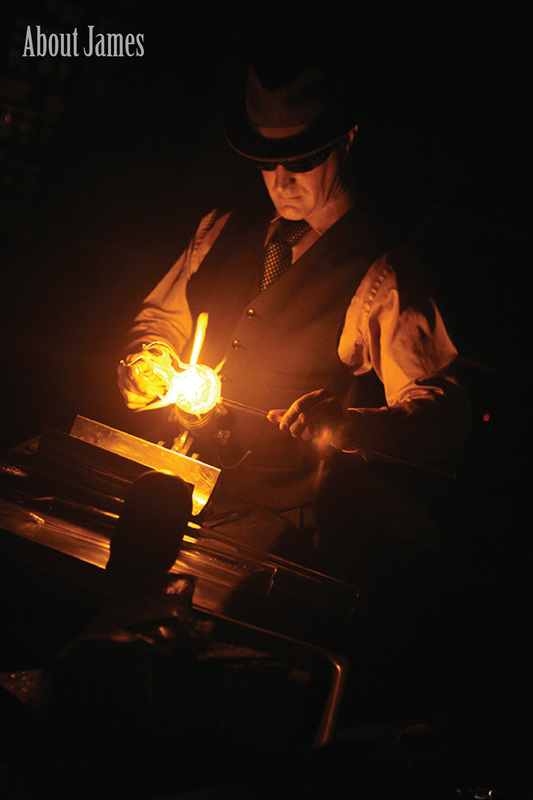 During the fall of 2000, while living in Seattle, Washington, a "right place, right time" moment occurred for James that reshaped his life.  A combination of corporate career frustration, an arts background left adrift and a meager 401-K plan tickled his field of possibilities while staring at an amazing blown glass sculpture.  What started out as an admiration for an object led directly to a relationship with its force.

The physical, dimensional nature of the glass art form reflects James' primary points of reference in self expression:  He spent 13 of his formative years as a competitive gymnast, as well as, his adolescence skateboarding in Clearwater, Florida.  Those athletic endeavors required meditation upon movement developing an ability to project complex imagery within his mind.  One day, a fateful, school field trip to the Salvador Dali Museum in St. Petersburg, Florida awakened in him a change in perception, impacting that imagery with the influences of the Surrealist Movement, initiating a journey to define his own artistic conversation.

Formally, James has spent 40 hours working directly with Justin Wells in Washington state and has taken three 3-day workshops with Master Glass Artist, Robert Mickelsen in Florida.  However, his most influential instruction came under the direction of Tucker Taylor, a renowned culinary gardener and long time friend, whom James worked with at Woodland Gardens in Athens, Georgia.  He credits Tucker with imparting an insight into nature and landscape, which inspired James to explore the primal appeal of vegetation.  James states,  “The essence of food, how we interact with it, the hunger and desire it stimulates, the way it reproduces, and its fantastic shapes and colors provides an intriguing guide to our consideration of beauty.“

James' primary exploration remains one of perception and choice.  With his narrative work, he merely sets a stage or poses a question via the elements involved.  And then humbly submits to the musings and interpretations of those who view it, whereby, a true communication emerges between the artist and the patron.  This attitude allows an insightful, juxtaposition between intent and experience... a conversation rather than a voice.

In December 2009, James was commissioned to produce six pathogen sculptures for the Smithsonian Institute's National Museum of Natural History.  The sculptures, envisioned by Dr. Rick Potts, are now part of the permanent exhibit, The David H. Koch Hall of Human Origins.  This exhibit opened March 17th 2010 marking the 100th anniversary of the Smithsonian Institute.  The commissioned sculptures are of Cholera, HIV, Bubonic Plague, Small Pox, Influenza, and Entamoeba Histolytica.