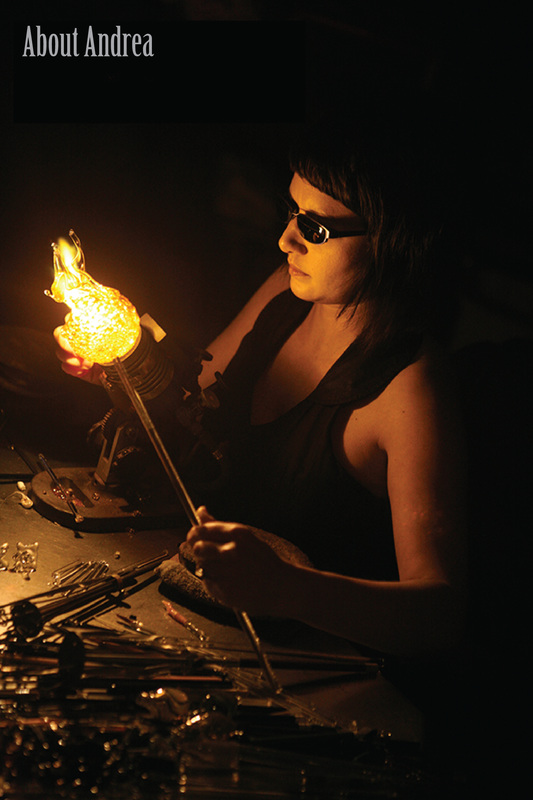 In the late 90's, with interests in both hip hop and tap dance, Andrea became influenced by the retro style and cute, funky designs of the club culture popular in that period.  During that time, an opportunity to take a flameworked bead making class provided for her the skill to create custom work as playful as the environment for which she had been attracted.  More importantly, it instilled in her an increasing desire to learn more about glass.

While working as a florist absorbing natural aesthetics, Andrea spent two years in her small, home studio expanding upon that initial class via experiment, books, and videos.  Desiring to further her knowledge of glass artistry, in 2003 she attended a workshop taught by Pip Cossette in glass fusing.  With that experience, her addiction to glass creation became ever clearer.  She decided to get involved with glass however she could and soon found yet another form of expression to elevate her abilities.

From 2004 til 2009, Andrea assisted Loren Schumann of Schumann Glass Art in Sarasota, Florida, learning intricate cold glass techniques of carving, etching, and leaded glass.  As his assistant, she was relied upon to execute many of his designs for large-scale architectural installations.  However, she had ideas of her own and attended the Ringling School of Art, specializing in Botanical Art and Stone Sculpture, developing a translation for the nature imprinted upon her as a florist.

Throughout those years, Andrea also continued to stay true to her hot and warm glass affections.  She developed an excitingly edgy jewelry line, known today as The Cammarata Collection, that expresses her appreciation for the organic presence found in the world around us.  Exhibiting this line of work brought her into contact with James Stanford during an art festival in December of 2011.  His blown glass sculptures presented her with another extension in glass for which she had yet to explore.  Upon finding out he was looking for an assistant, she made arrangements to work with him, quickly learned the techniques behind his designs, improved upon them and soon merged her business with his, becoming his partner.